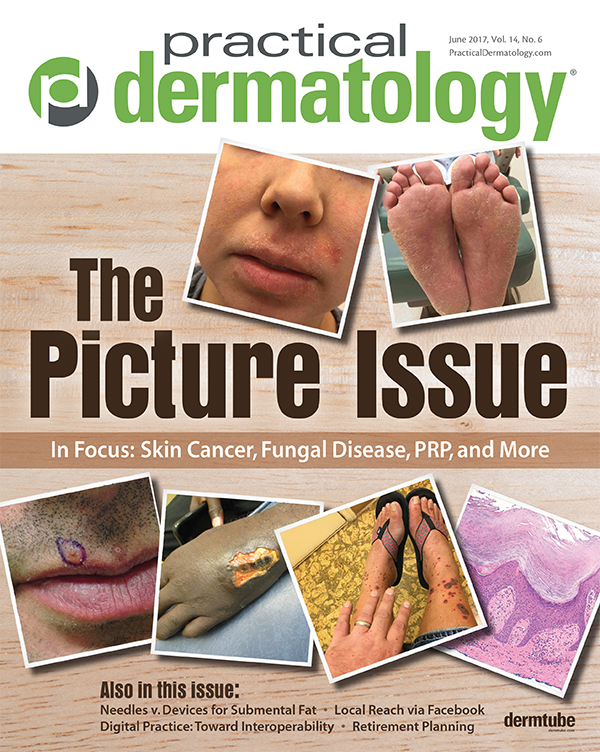 A Case of Orf; Creating a Business Plan

By Nicole Tillman, DO; Elizabeth Young, BS; Nathan Cleaver, DO

Bullous Lesions on the Hands of a Farmer: Case Report

By Nicole Tillman, DO; Elizabeth Young, BS; Nathan Cleaver, DO

A previously healthy 46-year-old woman presented with bullous lesions on her left dorsal hand and right middle finger. (Figure 1) The lesions appeared as red papules a few weeks prior and progressed into targetoid bullae. Associated symptoms included fever, fatigue, and bilateral swelling in her hands with occasional, sharp-shooting pain. She denied any new medications or exposures. She lives on a farm with sheep and upon further questioning admitted to bottle feeding her lambs around the time she first noticed the papules. She also admitted to having scratches on her hand and finger in the precise locations where the papules began.

Physical exam revealed an erythematous, targetoid bulla with a central eschar on her left hand and a smaller bulla with a dusky center and peripheral rim of erythema on her right finger. Non-pitting edema of her bilateral hands and fingers was also noted.

A biopsy was performed and histopathological examination demonstrated ballooning of the epidermal keratinocytes accompanied by intraepidermal vesiculation with a mixed cell infiltrate (Figure 2). Numerous eosinophils and occasional eosinophilic inclusion bodies were present throughout the inflammatory infiltrate. Her clinical presentation and histopathological findings led to the diagnosis of Orf (ecthyma contagiosum). Due to the self-limiting and predictable course of this disease, observation was recommended. Her lesions progressed as anticipated and two weeks later her bullous lesions developed a central crust with slight regression (Figure 3).

Orf (ecthyma contagiosum, contagious pustular dermatosis, scabby mouth) is a zoonotic infection endemic in sheep and goats that can be transmitted to humans by direct contact with an infected animals or objects.1-4 The causative organism is a parapox virus. When the animals are infected they may appear ill, but oftentimes the skin lesions will be the only observable sign. Cutaneous lesions occur around the mouth, lips or udders.5 Occupational exposures place farmers, sheep shearers, veterinarians, and butchers most at risk.4

Lesions have a predilection for the dorsal hands and fingers.1,3 An average incubation period of two to six days occurs before a macule or papule develops at the site of inoculation. The cutaneous lesions in humans go through six predictable stages: (1) maculopapular, (2) targetoid, (3) acute, (4) regenerative, (5) papillomatous, (6) regressive.1,4 Each stage lasts approximately one week. An erythematous or violaceous macule/papule develops at the site of inoculation and characterizes the first stage. The macule progresses into an erythematous papule with a surrounding white middle ring and an erythematous periphery, characterizing the second stage. During the third stage, a nodule develops and may become exudative. The regenerative stage is defined by black dots with a yellow crust over the nodule. During the papillomatous stage, the lesion continues to crust and the surface may become papillomatous. The regressive stage occurs when the lesion involutes and resolves. Pain accompanying the lesion has been reported but varies in severity. Low-grade fever, regional lymphadenopathy, and malaise are occasionally reported.1 Lesions typically resolve within six to eight weeks without scarring.3,4

Orf (ecthyma contagiosum, contagious pustular dermatosis, scabby mouth) is a zoonotic infection endemic in sheep and goats that can be transmitted to humans by direct contact with an infected animal or object.

The diagnosis can be made clinically, however histopathology may be helpful.5 Histopathology will vary depending on the stage of the lesion. Early lesions show moderate acanthosis with pallor and vacuolization of the cells in the epidermis.6 Viral eosinophilic inclusion bodies, predominately intracytoplasmic, are present.1 A mixed inflammatory infiltrate of lymphocytes, macrophages, eosinophils and plasma cells occurs. Epidermal necrosis may be noted in older lesions. Dermal edema, extravasated erythrocytes and dilated vessels may also be appreciated. Other modalities for diagnosis include fluorescent antibody tests, electron microscopy, and polymerase chain reaction (PCR).5,6

The clinical differential includes tularemia, milker’s nodule, cowpox, and cutaneous anthrax.3,6 Tularemia occurs with infection of Francisella tularensis following contact with infected rabbits. Cutaneous anthrax is due to infection with Bacillus anthracis and develops after contact with infected animals (goats or sheep) or animal products.6 Anthrax and tularemia can be differentiated from Orf based on their histology. Similar histologic findings to Orf can be seen with other diseases caused by poxvirus such as milker’s nodule or cowpox. Milker’s nodule occurs after contact with cattle. The proper diagnosis is determined from animal exposure and/or PCR.7

The Practical Dermatology® Editorial Board is now accepting submissions for the 2017 Resident Resource Center column. The Editorial Board is looking for compelling case studies and original research. Accepted manuscripts will be published in the magazine and online. Please send all submissions to dmann@bmctoday.com for consideration.

In healthy individuals, the lesions of Orf are self-limiting.1,4 In immunocompromised individuals or individuals with resistant lesions, other treatment modalities are effective, including surgical excision, topical imiquimod, cryotherapy, or cidofovir.3-5,8,9

Orf is a zoonotic infection with a higher prevalence in butchers, farmers, and veterinarians.1-4 Transmission occurs when open skin contacts an infected animal, particularly sheep. An initial macule or papule develops and progresses through multiple, predictable stages. Spontaneous regression occurs over six weeks and lesions typically heal without scarring.1,3,4,6 The diagnosis is made clinically, and/or with histopathology or PCR. Prevention of Orf is achieved by wearing gloves during exposure to potentially infected animals.1,6

The authors have no relevant disclosures.

Nicole Tillman, DO, is a dermatology resident at Northeast Regional Medical Center in Kirksville, MO.

Nathan Cleaver, DO, is a dermatologist and dermatopathologist at Northeast Regional Medical Center.

Want a loan? Get a business plan!

“One of the first tasks that I needed to accomplish was applying for a small business loan. This involves much more than just asking the bank for a loan for a certain amount…The basics include a detailed business plan that projects three to five years ahead and outlines how you intend to grow and establish a stable source of revenue.”

Get all the details at PracticePathMD.com

Keep Your Dermatology Practice HIPAA Compliant With These 5 Photo Tips

Know Your Lesions: The Many Variations of Seborrheic Keratosis

SKs are benign lesions that may be removed for medical or aesthetic reasons. It’s essential to distinguish SKs from malignant lesions.

An established intervention coupled with a newer treatment may offer optimal results.

Taking It On The Chin: Kybella vs. CoolSculpting for Reduction of Submental Fat

At least two noninvasive modalities that specifically target double chins can be used alone or together.